Can the NFL Get Back to Football?

The National Football League has always been the main attraction during the fall season but this this year may be a little different.

On Aug. 26, 2016, 49ers’ quarterback Colin Kaepernick attracted national media attention for taking a knee during the National Anthem. Ever since, the player has been the center of controversy, causing questions if this was a sign of protest or disrespect.

“I am not going to stand up to show pride in a flag for a country that oppresses black people and people of color,” Kaepernick told NFL Media in an exclusive intervieN. “To me, this is bigger than football and it would be selfish on my part to look the other way. There are bodies in the street and people getting paid leave and getting away with murder.”

The NFL responded to the Kaepernick’s kneeling stating:

“Players are encouraged but not required to stand during the playing of the National Anthem.”

The controversy continued for months but died down once the season ended. The calm didn’t last long once 2017 football got going. Kaepernick was not the only one taking a knee or sitting during the anthem anymore. It had become a sign of protest among several players.

The PR headache that NFL Commissioner Roger Goodell thought had dissolved, now was the main story on every major U.S. media outlet. President Donald Trump may have jump- started the attention. The President made several statements regarding players who knelt during the anthem on his Twitter account Sept. 23.

The country exploded with commentary with both disdain and applause for Trump’s statements. Sunday, Sept, 24, became not a day of football, but a day of politics, with the public waiting to see how the teams would react. As the first games played, coaches and teammates stood side by side, some kneeling, some holding hands, all united. 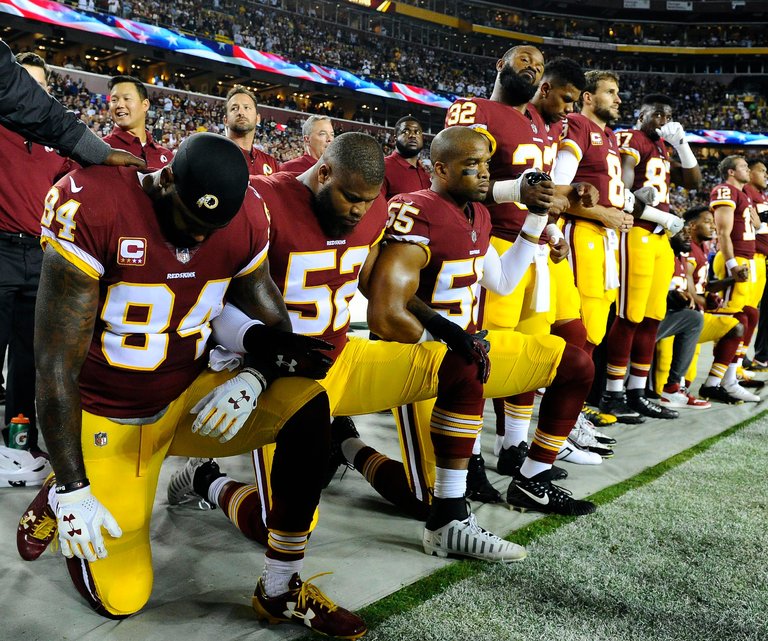 The NFL needed good PR and they needed it fast. Unfortunately, Goodell fell short in many people’s eyes during his press conference Oct. 18. PR Daily reported “Responding to a series of questions about pro football players’ protests, Goodell said that while only ‘about a half a dozen players’ continue to kneel for the national anthem, ‘we’re going to continue to work to try to put that at zero.'” Goodell did not comment on whether NFL teams would discipline players for kneeling, but did state he had not spoken to President Trump regarding the protests.

What else could Goodell have said? In my opinion, he is in a tough position. He is trying to stay neutral politically in a very political situation and how is an organization supposed to control individuals when it comes to standing or kneeling on the field? Do you think teams should start punishing players for taking a knee so the NFL doesn’t have to deal with the issue anymore or is that crossing an ethical line regarding free speech? Should he have been more specific when addressing questions, as many are saying he was vague and avoided the core issue? Can Goodell tell teams to “get back to football,” to take a stand on one of the most controversial subjects in years? To me, that is unrealistic and unreasonable.

This entry was posted in amp. Bookmark the permalink.