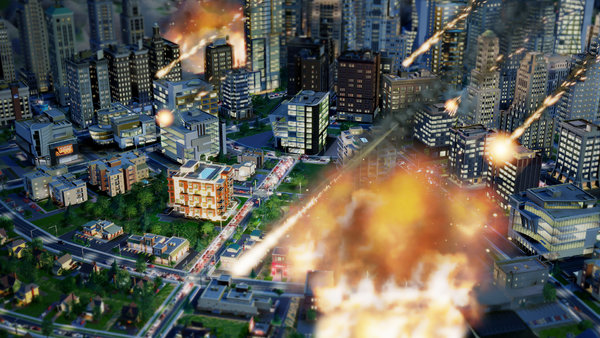 Video games have come a long way since the release of the Atari 2600 in 1977. For each new breakthrough in the horsepower of technology, video games have also evolved, allowing players new opportunities that were once impossible. However, sometimes the advancements in technology are more trouble than they’re worth, and Electronic Arts (EA) is learning that the hard way.

SimCity was released on the PC and Mac on March 5, 2013 to much excitement from gamers all over the world. It was the franchise’s fifth major release, and the first in more than 10 years. The game allows players to create their own city and manage it, however they see fit. New to this version was the concept of “Regions,” which meant your city would live in an area filled with other players’ cities, and your two cities could trade supplies (i.e., an inland city could trade water from a coastal city in return for metals). This design decision made it so the game always had to be online, whether playing by yourself or with friends.

The game went in to a closed beta test a week before the official launch, and it went smoothly. But when the game went live, the servers crashed under the heavy load of anxious players, and made the game unplayable for millions worldwide.

Upon launching, the game tries to connect to the servers before advancing to the main menu. Since they were down though, the game would fail to connect and constantly retry until it could connect. This process took some people hours just to get to the main menu, and if one was lucky enough to actually get in to a game, it constantly autosaved data to the servers (to allow other cities in a Region to buy or trade supplies). Players would often lose hours of playing time due to the saves never fully saving or corrupting due to failed connections with servers.

The product was utterly unplayable, and word quickly spread in the gaming community. Polygon.com initally gave the game a 9.5 out of 10, saying it was “a near-perfect fusion of the classic simulation with modern social and online play elements.” The review also mentioned how the game was always online, saying that it “can be problematic at times, but in my experience with SimCity, it was also (when it worked) seamless.”

But on March 7, two days after the game launched, Polygon updated their score to account for the game’s problems, dropping it to a 4 out of 10, saying “given this currently horrendous state of both accessibility and playability, and acknowledging the fact that even the drastic changes EA has made to the game in its attempts to address them haven’t worked, it is hard to continue to recommend SimCity.”

But things got worse for EA. Amazon.com decided to pull the game from their site, and offered all players who bought the game through them a full $60 refund. Almost every other retailer soon followed in Amazon’s footsteps, offering full refunds. The lone exception was EA, and chat records soon surfaced online of EA customer service representatives denying people their requests for a refund.

In a panic to try and reduce server workload, they began to remove gameplay features, such as “Cheetah” mode, which increases the simulation speed allowing players to see the effects of their decisions act out much more quickly than normal. This deletion drastically changed the way the game was played.

The problems have still plagued EA, and it has gotten so bad that the company’s CEO, John Riccitiello, was forced to step down, and the company’s stock has dropped almost 10 percent (NASDAQ:EA).

EA has tried to right their wrong by offering people who bought the game before March 18 full refunds, and another free game from a list of EA published games.

But what went wrong?

Many game journalists blame EA for not getting out in front of the issue quickly enough, and then undermining the impact once they did respond, as well as offering false claims. In their first public response, EA said the server problems were affecting a “small percentage of users,” and that stability would return by Friday afternoon of launch week. They never did and still have not, with features such as Cheetah mode still absent from the game.

Patrick Kelpek, news editor of Giant Bomb.com, said that EA and Maxis failed to face the problem, and did a dreadful job in communicating to consumers when they would be able to use the product they bought with their hard-earned cash.

“They needed to put a camera in front of developers and engineers, people who could explain the problems,” Klepek said on their weekly podcast, the Giant Bombcast. “By putting a face to the problem, gamers are usually much more understanding when things go wrong, because they realize people are behind it, and are working hard and staying late to fix it.” Despite finally becoming more transparent about the design of the game and the issues surrounding it, the public had already turned on Bradshaw and her company, Maxis.

Days later, Lucy Bradshaw, general manager of Maxis (SimCity’s developer) began issuing statements about how the launch was “challenging,” and offering more concrete details about what went wrong, and what Maxis os doing to fix the problem, but the damage was done.

It seems EA and Maxis haven’t learned their lesson, unfortunately, and are still sticking to their guns in defending the “always online” feature that created this mess. The story has drawn the attention of Forbes and the New York Times, and has cast a shadow on what was one of the most eagerly anticipated games of 2013, from the second largest video game publisher in the world.

What do you think Maxis should have done differently? Should they have been more transparent, prepared for launch-day woes, or do you think they handled things as well as they could have?