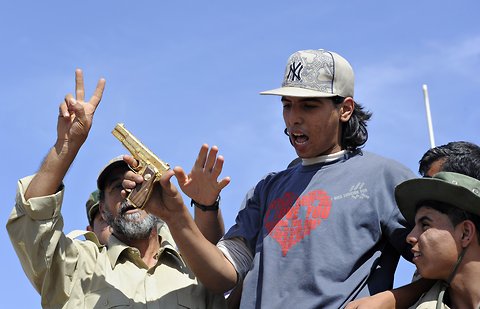 One of the big news stories of this past week was the killing of the Libyan dictator, Moammar Gadhafi.  On Wednesday, Oct. 19, after nearly 42 years of a brutal reign, Col. Moammar Gadhafi was gunned down in the Libyan city of Sirte reportedly by a rebel who was wearing a New York Yankees baseball cap.  Mohammed El Bibi , the rebel in question, was also reported by the BBC to have been wearing a blue t-shirt with the words “I Love You” in red on the front.  Other than the obvious political implications, what is the significance of such media exposure from a corporate branding perspective?  I believe you couldn’t pay for that kind of exposure even if you wanted to.  While it is possible that El Bibi is a New York Yankee fan, it is more probable that the Yankee brand goes beyond the baseball team, but extends to “Americana” in general.  As President Barack Obama and Secretary of State Hillary Clinton try to bring American-style democracy to the region, a rebel wearing a Yankees cap could extend diplomacy further than any formal summit.

Ho Kwon Ping, a recent speaker at the PR Academy’s Sixth Annual Conference and Executive Chairman of  Banyan Tree Holdings, known mostly for its ultra-luxe chain of eco-friendly resorts, declared his belief that “the packaging has come to replace the products.” He also further asserted that “credibility is the most important, but yet sorely lacking attribution to branding.”  I believe these statements are true.  Hence, the power of the Yankee baseball cap.  America has come to be seen as a “winner” throughout most of the world.  Ho believes a strong brand name and a well-defined marketing strategy are two of the many vital factors that will enable sustained growth and help a company standout from its competitors.

The New York Yankees project a strong brand name and garner a winning reputation as one of the most storied and successful franchises in baseball.  While Red Sox fans may beg to differ, the Yankess tend to represent “Team America” on the world stage.  The strength of the Yankee baseball cap would not be nearly as credible if they were a losing franchise.

Do you agree with this assertion? What do you think it means that Gaddafi’s killer was wearing a Yankee baseball cap?

This entry was posted in Elevation PR, Uncategorized. Bookmark the permalink.